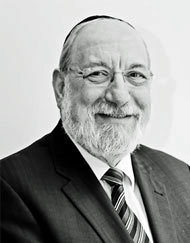 Rabbi Alan Plancey is the Emeritus Rabbi of BES. Rabbi Plancey and his wife Rebbetzen Miriam led the community for more than 30 years, overseeing the huge growth in the number of members over three decades, before retiring as Minister of BES in 2007.

Rabbi Plancey continues to play an active role in the BES community, as well as representing Borehamwood South on Hertfordshire County Council and being on Norwood's Advisory Council. Rabbi Plancey is currently Deputy Mayor of Hertsmere.