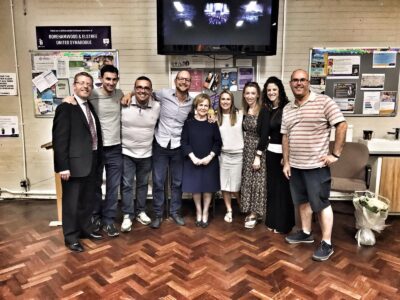 "Without hope, there is no survival", said Mala Tribich MBE, as she addressed a packed audience of 200 people at Borehamwood and Elstree United Synagogue on Sunday evening 21 July.

During her talk, she told the audience of her story, from her happy early childhood life in Pietrakow, Poland to the horrors of Bergen Belsen. Mala shared photographs of her local Synagogue and the park where she played, of the Town Hall and the Town Square. She later explained how they survived in the ghetto and how her family had paid for her to be looked after outside the town during the earlier 'rounding up'.

The audience heard that Mala was especially close with her family, in particular her cousins and spent her time in Bergen Belsen with her cousin Anna. Unbeknown to her at the time, her brother Ben was in Buchenwald and also miraculously survived the horrors of the Holocaust.

Mala said: "I really was incredibly lucky. I've no idea how else to describe it. I'm incredibly grateful to the British Forces who liberated us but also the kind man from Glasgow who paid the guarantee for her to be granted a VISA for the UK after the War had ended."

Rabbi Alex Chapper said: “Mala is an inspiration. Despite her experiences, she has such chiyut – energy and vitality and it is such a privilege to hear her share her personal story of loss and survival.  She is more than just a survivor, she is a hero for dedicating her life to educating others about the Holocaust. What she does is so important to ensure that we learn the lessons of the past.”

Mala's story was particularly poignant for this audience as earlier this year, 40 members of the community had retraced her story in Poland on a JRoots tour organised and led by Rabbi Garson of JRoots and Rabbi and Rebbetzin Chapper.

The event was arranged by the newly formed Zachor, We Remember Committee, to ensure that Mala's story is never forgotten and that the horrors of the Holocaust are taught to as many people as possible. The committee is planning more events throughout the year and into next year, including another Trip to Poland. For more information on these events please contact .